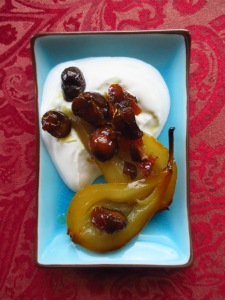 Over the past few long weeks whilst B has been poorly and cooped up, we’ve ended up doing the inevitable: watching too much TV.  I won’t divulge here exactly how many period dramas and 80s and 90s films this has involved – I’m good enough at embarrassing myself by accident, there’s no need to do so purposely.  But it hasn’t all been frivolous escapism, not quite, anyway. B’s desire to enjoy food, but only being able to do so vicariously, has led to a serious amount of food programme viewing – in particular, lots of old episodes of River Cottage and Hugh’s 3 Good Things.  During one of these TV marathons a recipe that caught my eye was Allegra McEvedy’s prune fool with caramelised chestnuts, specifically the latter component (and not only because I’d knowingly had a vac-packed box of them, hidden at the back of the cupboard since Christmas 2013.)  It seemed like such a genius idea to contrast the dense yet soft texture of chestnuts with a glassy caramel shell.  I couldn’t not try it, and in doing so I discovered that it’s surprisingly simple to whip up a caramel coating, although I did make a mistake in not thoroughly stirring the nuts through before turning them out to set, meaning that a number were only partially coated.  Never mind, because I’d made double what was needed, anyway, and ended up blitzing the remainder with a little vanilla into a sweet, luxurious chestnut puree.

The caramelised chestnuts went beautifully with the juniper and honey scented pears, which were wonderful whether warm or at room temperature. Even if you didn’t want to eat it, it’s pretty much worth making purely to turn your home into the most deliciously fragranced place ever experienced. I’d thought about adding rosemary to the fruit, but in the end decided against it, and it wasn’t missed.  A bit of yoghurt brought the whole thing together, but I bet crème fraîche would be even better…

6 conference pears (they should be firm, with just a little give), peeled, halved and cored

About 20 juniper berries, slightly crushed with the back of a knife

Preheat the oven to 180°.  Line a baking tray with greaseproof paper, then brush lightly with oil.

Heat a dry saucepan over a medium hob, then add the sugar.  When you see the sugar around the edges start to turn brown, give the pan a little shake to move the sugar around (attempting to stir it whilst melting is futile, you’ll just get a sticky mess.)  Keep an eye on it, shaking regularly.  It doesn’t take too long to become dark, molten caramel.  Take care of course, as this stuff is like tasty lava.

As soon as all the sugar has melted, throw in the chestnuts and quickly stir so that all pieces are coated.  Tip out immediately onto the lined baking tray, spread out, and set aside to cool.

Next, arrange the pear halves in a baking dish.  Toss over the juniper berries and cinnamon stick, pour over the gin, then chop the butter into little pieces and arrange equally over the pears. Bake for fifteen minutes, then turn the pears and drizzle with honey. Return to the oven for another fifteen minutes, or until the pears are tender and caramelised.

Chop up the cooled caramelised chestnuts, and serve with the pears, with maybe a little ice cream, crème fraîche or yoghurt.