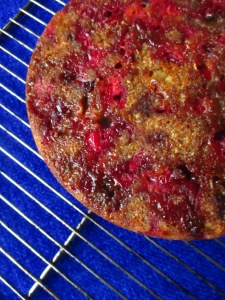 We went up in to the hills earlier today, to nourish body and mind in the open air before the creeping darkness set in, which seems to be happening earlier and earlier with each passing day.  I wanted to collect sloes – late I know, but thought we might get lucky and happen on a few branches laden with perfectly ripe fruit, which with some improvisation could fragrance up a bottle of gin just enough to crack open in time for the festive period.  But no such luck, and I suppose I shouldn’t be too disappointed, as after all there’s less than four weeks until Christmas and perhaps the drink would be a let down, what with being quite so rushed.  So instead we collected a couple of handfuls of holly, rosehips, viburnum and the like to beautify the lounge.  And now I’m thinking of an alternative alcoholic infusion – any ideas?

I’d had vague ideas about making a Christmas cake, too, although nothing has cemented in my mind and time, as is often the way with time, is slipping away.  It wouldn’t be the end of the world, however, if I just end up whipping up this cranberry cake, as it’s completely delicious: indulgently buttery, harbouring a hint of spice and a deep fruity note from the orange zest, and is turned into something really quite celebratory what with the brandy and marzipan.  Not to mention how stunning it looks, studded with ruby red cranberries.  I highly recommend it – perhaps an alternative offering for any haters of the traditional Christmas cake…

A good splash of brandy

Grease your cake tin if necessary – I use a silicone one which doesn’t need it.

Throw the whole cranberries over the base of the tin.  Cut the 25g butter into small chunks, and distribute evenly over the top of the cranberries, followed by the 20g sugar and then all of the orange zest.

Next, put the eggs into a large mixing bowl along with the remaining sugar, and combine with an electric whisk until frothy.  Add the cooled butter, whisk in, then sift in the flour, baking powder, and spices.  Give it all another swift beat until combined.

Finally, use a spatula to fold through the ground almonds, brandy (I use about an espresso cupful, sometimes a little more) and chopped marzipan and stem ginger.  The batter will be quite loose, but don’t worry!

Spoon evenly over the cranberries, then gently make a well in the middle to ensure that when baked, it will be an even surface.  Bake for about 35 minutes, or until done.  Remove from the oven and allow to cool for at least ten minutes before turning out of the pan. 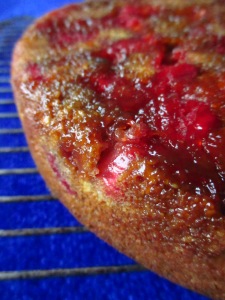