I’ve really been cramming the posts in lately, haven’t I?  To me it sounds a little counter-intuitive, but I’ve actually been finding that I’ve been more productive when working from home if I break my time up and have regular breaks where I focus on something completely different than the job in hand.  Posting recipes (and, of course, making them) has been an excellent example of this these last couple of weeks!  I’m sure I’ll have a dryer blogging patch sometime soon when my energies are focussed elsewhere, but for now, I suppose I’m subjecting you all to a bit of an onslaught.

Can I make it bearable by posting some definite food porn?  B made these, thankfully, so thankfully, to be given away.  I say thankfully, because I got left one to nibble on, and oh man, I can tell you, had there been any more sitting in the kitchen… Well, it’s likely I would’ve scoffed the lot.  And, much as I can try and pull an innocent face, a tone of shock – ‘The caramel shortbreads have all gone missing, you say?  There’s nothing left but a few crumbs on the worktop?  Wha…?!  We must have mice!’  Well, I could try that, but as the song goes, my hips don’t lie.  The proof of my guilt would no doubt manifest a few days down the line with a pair of jeans that, try as I might, wouldn’t do up.  And well-fitting jeans are a beautiful thing, so bye-bye, decadent wedges of joy.  Go and make someone else happy.  I’m sure you will.

This is a slight adaptation of a recipe by Tom Norrington-Davies, from his book Like Mother Used to Make (no, I hadn’t heard of him either.  Sorry, Tom.)  The book used to be a part of B’s collection, but is no longer with us – we didn’t really use it (ahem, again, sorry, Tom, it’s not you, it’s me) so gave it away one time on charity shop sweep when we were packing up to move flat.  He adds water to the chocolate in order to make the slices easier to cut through, but a layer of soft, watered down chocolate isn’t really our thing, so instead, B scores lines into the surface when it’s semi-set, which makes it really easy to slice when you’re ready.  The last time we made it we added orange zest and salted pistachio nuts to the chocolate, which made for an excellent twist on a classic, but this time we didn’t meddle too much, just adding a teaspoon of vanilla paste to the caramel for extra flavour.

Caramel shortbread is, obviously, an indulgent treat, but this recipe is a particularly generous one, using two large bars of chocolate to sit on top of a layer of caramel almost as thick as the very buttery biscuit base.  Just as it should be!

You have to make this recipe in stages, leaving time for cooling before adding each layer, so make sure you start it at least a few hours before you want to eat it!

Sift the flour into a large bowl.  Stir through the sugar, then add the butter cut up into little cubes (not hard, but not melty, either.)  Rub it in with your fingertips.  After not too long it’ll start to form a dough – keep going until it makes a ball.  Press it in to a small(ish) cake tin (greased and lined unless you’re using a silicone one.)  Make sure it’s even, then bake for about twenty minutes, until firm and pale gold in colour.  Remove from the oven and set aside to cool.

Once cool, you can prepare the caramel.  In a saucepan, melt the butter together with the sugar.  Once the sugar has all dissolved, stir in the condensed milk and golden syrup.  Bring it to a boil, stir well, then reduce heat and cook on a simmer for about 5-10 minutes, until it starts to thicken and darken in colour.  Bear in mind that the caramel sets a little once cooled, so whilst you don’t want the hot caramel to be too runny, you don’t want it to be really thick, either.  Stir in the vanilla, then pour the caramel over the shortbread.  Let it cool.

Next, chop the chocolate into small pieces and let it melt in a heatproof bowl set over a saucepan of simmering water, making sure that the base of the bowl doesn’t touch the water.  Once it has all melted, pour over the cooled caramel.

Let the chocolate cool for five to ten minutes before using a sturdy knife to score lines into the surface of the chocolate to allow for easy portioning up later.  Once the it’s cool enough to put in the fridge, let it continue to set in there.  Re-trace the lines with a sharp knife after an hour or so, before returning to the fridge to set completely (we left ours overnight.)  When you’re ready to slice it up, gently run a knife around the edges of the pan before carefully turning out, then slice along the grooves in the chocolate.  Enjoy! 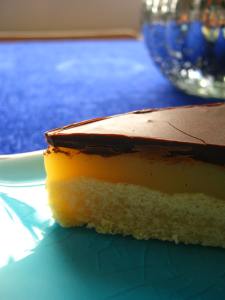