Do you like cape gooseberries?  I’ve loved them since I was little.  My mother, who had grown up in Tanzania, used to tell me stories about how when she was my age, she would go with the other local children to pick these, which grew wild in abundance.  She told me that cape gooseberry jam was the only jam that her own mother ever made – huge jars of it, over-set and over-sweet, but nevertheless, still jam, and still appreciated by her and her siblings.

As a kid, I could’ve eaten these by the bucketful – the theatre of peeling back the papery husks to reveal the appealing shiny orange fruit adding to the enjoyment of their tangy flavour.  I still enjoy a bowlful or two, every now and then, but I’ve never cooked with them.  I thought it might work, their slight tartness similar to that of raspberries, which work so well in cakes and desserts.  And so began a cake recipe, inspired by Selma’s Iced Lemon Squares.  I would have just made Selma’s cake, it looked so good, but I’d made a lemon and almond cake a couple of days before, so thought I’d play with the recipe.  Lime instead of the lemon?  Sounds great.  Dessicated coconut instead of ground almonds?  Of course.  And a few cape gooseberries thrown in for good measure?  Why not?

But this is the point where we have to say bye bye, beautiful cake to Selma’s wonderful looking creation.  For a few, shall we say, slight problems, started popping up.  To begin with, I’d already resigned myself to the fact that my pieces of cake were not going to be bars.  It’s not that I don’t have a square cake tin – I do, it just happens to be stored away in the Cavern of Chaos that is our under-stairs cupboard, and I was not in any way, shape or form ready to tackle that.  But that I could deal with, bars another day.  Next?  Well, next I used the wrong flour.  Instead of plain flour, to get that thin cake base, I used self-raising flour.  Ok, that’s alright, surely?  And yes, probably.  Then, mid measuring out ingredients, my trusty digital scales died.  I could have gone out to buy a new battery, of course.  But that would have involved having to face the Niagra Falls-esque rain, and that’s just not something that I do.  So I then had to deal with finding out conversion tables so that I could measure by cups instead, not something I’m familiar with.  That done, I probably could’ve taken a breath or two, and continued following the recipe I had in front of me.  And that’s what I thought I was doing.  Stir together the dry ingredients – check.  Beat in the butter – check.  Whisk the eggs in a small bowl – oops!  I just cracked them straight in to the butter-flour mix.  Add the eggs to the flour mixture and beat until creamy, about 30 seconds to 1 minute – ummm, or, get distracted listening to the radio and keep going for about five minutes?  OK, perhaps not five.  Four?  And then realise, stop in a panic, and knock the mixing bowl over?  And then take that breath that should’ve been taken before I started.  And then realise I forgot to add the lime zest?

Pretty glorious!  If I’m going to find something to criticise, I’d say it was probably ever so slightly too sweet for my taste, but still very enjoyable.  The coconut gave a lovely texture and flavour, and the whole thing was delicately flavoured with lime.  Will throw in more lime zest next time as I tend to like big, punchy flavours, but overall, I can’t complain.  Oh, and more cape gooseberries next time, as some of them did a bit of a disappearing act in the oven.  But delicious, and the important thing:  there will definitely be a next time!

50g dessicated coconut (unsweetened), plus a little extra for sprinkling

A pinch of salt

Zest of 2 limes (or three, if you want more of a limey hit), plus a little extra for sprinkling

Preheat the oven to 180ºC.  Grease and line your cake tin if not using silicone.

Sift the flour, baking powder and salt into a large mixing bowl.  Add the coconut, sugar, and lime zest, and mix together with a fork until well combined.

Cut the butter into cubes, and add to the mixing bowl.  With an electric whisk, beat it in.  Beware!  You need to do this with the whisk on the low setting, otherwise you’ll end up with butter everywhere but in the bowl.  You’ll end up with a lumpy mix, looking a bit like crumble mixture before you’ve finished rubbing the fat in.

Add the eggs and one tablespoon of lime juice.  Whisk in on a medium setting until combined and creamy (about 1-2 minutes, although I accidentally went on for much longer.)

Spoon into the cake tin (it will be quite a thick mixture), then press in the berries.

Bake in the middle of the oven.  Check after about twenty minutes, and put some foil over the top if it looks like it’s browning too quickly.  In total, I baked mine for thirty minutes.

Remove from the oven and allow to cool in the tin for about ten minutes, before turning out onto a wire rack.

Once the cake is completely cool, you can make the icing.  Sift the icing sugar into a small bowl, then mix in the remaining lime juice.  Spread evenly over the top of the cake, then sprinkle over a little coconut and lime zest.  Let the icing set before cutting the cake.  Then scoff with tea! 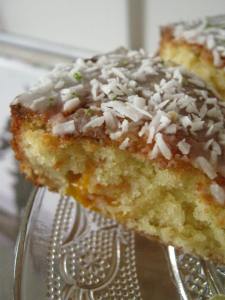