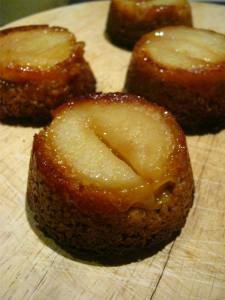 I made flapjacks for the first time a few days ago, and I’ve already made more.  The first batch were a definite success, but I was trying to recreate the flavour of the flapjacks sold in a local coffee shop, so with this second lot I tried to be a little more creative.  Again, I wanted something fruity, and this time I decided to go for quince.  Quince is a recent addition to my kitchen – I cooked with it for the first time when making this tagine https://cheesybiscuit.wordpress.com/2013/11/30/50-minute-duck-tagine-with-kumquat-quince-with-cauliflower-couscous/,  and I feel like it’s been gently wooing me ever since.  Fragrant, with a pleasant bite (and simply the happiest looking thing your fruit bowl has ever been acquainted with.)  I would normally turn my nose up at a honey flapjack, preferring the nostalgic taste of golden syrup, but quince seems a natural friend to honey.  I added a little bit of lemon zest just to boost the fruitiness factor, a touch of ground ginger to add depth, substituted some of the oats for ground almonds to shift the texture, and… Wow!  Somewhere between a flapjack and a cake, crisp on the outside, with perfectly soft, melt-in-the-mouth, almost caramelised fruit on top.  Damn good!

130g runny honey (nothing to dark or heavy tasting)

Begin by preparing the quince – peel, slice in half lengthways, then in to semi circles, before removing the core.  Gently melt the 30g of butter in a large frying pan, then add the pieces of quince.  Cook slowly, turning every 10 minutes or so, until soft (about 30 minutes.)

Meanwhile, pre-heat the oven to 180ºC.  In a mixing bowl, stir together the oats, ground almonds, and ginger.

Over a low heat, melt the butter, sugar, and honey.  Once it’s all dissolved, pour the mixture over the oats, then stir well until all mixed.

I used a silicone muffin pan, so there was no need to grease.  Arrange quince pieces into each muffin case, sprinkle with lemon zest, then spoon on the flapjack mix, compacting down with the spoon.

Bake for  about 20 minutes, until the flapjacks have turned golden brown and are beginning to go crisp around the edges.  Make sure to check them after 15 or 20 minutes, as mine were just about to catch around the edges – a little greaseproof paper on the top at that point will soon sort that out.  Let them cool for at least fifteen minutes before turning out (but try and manage to eat one whilst still warm!) 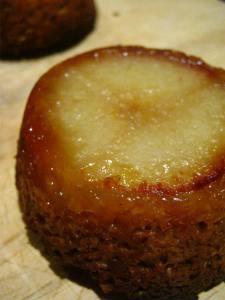