I had about 100g of defrosted berries left over after making the mulled berries in wine recipe (https://cheesybiscuit.wordpress.com/2013/12/31/mulled-berries-in-wine/), and as we’ve got plenty of other fruit to eat over yoghurt, I was thinking about how to make the most of them.  And then it hit me – one of our favourite coffee shops sells this fantastic flapjack bar with a layer of berries in the middle.  They’re not something we have often (there’s willpower involved in that, believe me) but once the possibility of trying to recreate them got in my head, there was no shaking it out.

Now, there was a slight problem:  I’ve never made flapjacks before.  Can’t really determine why, it’s just something that hasn’t happened.  But, I thought, how hard can it be?  I found a basic flapjack recipe – butter, sugar, golden syrup, oats, and crossed my fingers.  Luckily enough, they turned out fine.  Better than fine.  Ok, just a little misshapen, but then I could argue I modelled them in my own image.   Or, perhaps that’s because I didn’t account for the liquid from the fruit oozing out into the FJ mix.  Or… Perhaps because I was so bloody greedy, I couldn’t wait for them to cool before turning out of the silicone tray.  The latter explanation may well have the most to do with it, because they were so soft and gooey when I turned out, but have firmed up (whilst remaining moist) since cooling.

I really love the tartness of the unsweetened berries against the sticky sweet flavour of the flapjack, but feel free to add a little sugar to the fruit if you have a sweeter tooth than mine.  What a success – now, if only I could make a macchiato at home!

Pre-heat the oven to 180ºC.  In a mixing bowl, stir together the oats and spices.

Over a low heat, melt the butter, sugar, and golden syrup, stirring every so often.  Once everything is dissolved, pour the mixture over the oats, then stir until completely mixed in.

Grease your individual muffin cases (or a single pan, if you prefer) then spoon in the oaty mixture until each case is about half full, pressing down on them with the back of the spoon.  Divide the berries between each, then cover with the remaining flapjack mix, again compacting each one.

Bake for 20-25 minutes, until the flapjacks have turned golden brown and are beginning to firm up.  PRACTISE RESTRAINT – it’s good for you – and let them cool completely before turning out. 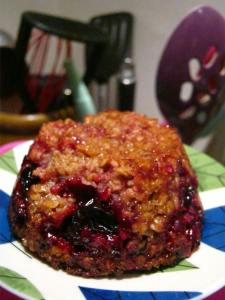